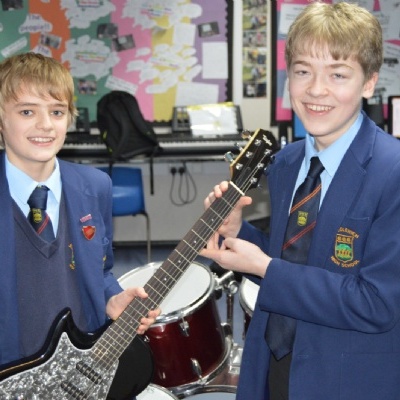 The Music Department are celebrating, after being awarded a grant from the EMI Music Sound Foundation.

The Music Department are celebrating, after being awarded a grant from the EMI Music Sound Foundation.

The application was completed by Mrs. Grierson back in September, telling EMI how they would spend the grant and how it would impact on the students in the classroom. By early October she received a letter from the Foundation explaining that the application had been successful and the department had been awarded £1000.

Mrs. Grierson and Mrs. Hughes used the money to buy 5 bass guitars with amps and 4 electric guitars with amps. Mrs. Grierson said “These will be used regularly with all year groups to extend and enhance the band work that the department is introducing, giving all pupils better all-round musical experiences.”

However, the good news doesn’t end there; a few days later they received an email which stated that the Foundation would also like to award them a Taylor Solid Body electric guitar. They were obviously thrilled, but it wasn’t until the guitar arrived that they discovered it was worth £1,200!

We are very much looking forward to hearing the new instruments in use.